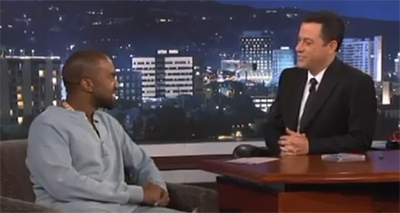 Kanye West did not perform on last night’s Jimmy Kimmel Live but he did address some of the problems he had with Jimmy Kimmel. The argument between the two entertainers started when Kimmel spoofed Kanye West’s interview with Zane Lowe by using children to imitate West and Lowe. This set West on a twitter rant when he started criticizing Kimmel and started and argument between the two, you can see all of that here.
The interview started awkwardly as Kimmel asked West who he was wearing, as it moved on West spoke and explained his actions and his state of mind as he gave the Zane Lowe interview. The whole tone of the interview was a little tense. You can watch the whole interview below.